If you have any questions or suggestions, you can always email them to us.

Side by Side Verses Molasses

All things being equal…. there is a significant difference 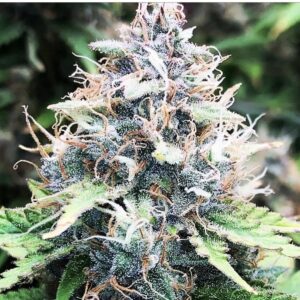 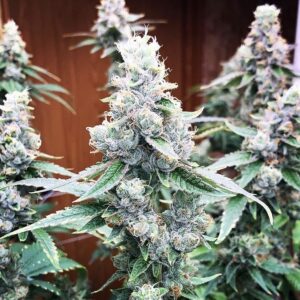 The pictures above are from a CBG hemp plant that was tested at over 23% CBGA and Non detectable THC.  CBG has no psychoactivity but we are finding more and more evidence of medicinal benefits. CBGA is the acid form prior to CBG conversion.

Brix57 is not made from a sugar beet or sugarcane product so it is not molasses based.  Brix57 is a 57% sugar supplement that is proprietary Non-GMO plant based fructose and glucose. It is clean with no undesired additives, such as preservatives and chemicals.  As it is a piece to GLB’s nutrient line we separated our short to medium chain sugars into a separate product.  We did not add additional trace minerals or additives as they are already naturally in the rest of our line.  The purpose of this sugar supplement is one of 3 to 4 separate microbial food sources depending on what other GLB nutrients are used. But even though it is only a clean sugar and does not have additional mineral, our organic chemist has found that it is not needed for its purpose.

Brix57 is not only used as a food source and help in manufacturing complex carbohydrates, but has the ability to lessen the workload on the microorganisms to produce sugar for the plant.  It has a sustained life, which is longer than the short life span that microorganisms live based on molasses.   Molasses is like eating donuts and an energy drink, there is spike in energy then a dramatic fall off where Brix57 has found to keep the energy sustained for longer periods. The less stress on the plants, the more energy that microbes can spend building up secondary metabolites. 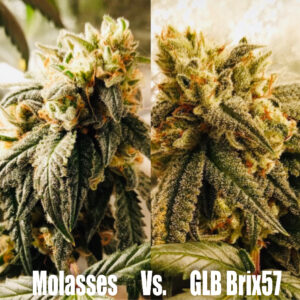 “The Brix57 extends the trichomes all over and are heavy cake layered, as the molasses is just an even coating that stays close to the buds. Also, the molasses stems are weak as hell unlike the Brix57, not sure what’s up with that but the Brix57 will go down the stem from node to node.”

If you take a look at this split picture of above, you can visibly see more trichomes on the plant on the right than on the left. It does not only affect trichomes but the true oils and resin production in the plant.  The most common word that comes to mind is the flowers just don not feels sticky but greasy.

The cleaner the nutrients, the faster the uptake, the more energy microorganism have to increase secondary metabolites.  Brix57 ramps up and multiplies the microorganisms so they can work more efficiently and faster to raise those aspects that make fruit and vegetables taste and smell better, and flowers as well.

Day 15 until Flush – Depending on strain as you may have large internodal spacing if used during the stretch of your plant.

Every Other day Feed :  2 mL per gallon

*** If growers cannot control humidity or are outside in humid environments and growing hemp, we recommend using sugar from the start of flower to it will stretch the internodal spacing between flowers and they may not have the same stacking but it will give additional airflow to lessen any type of bud rot when in wet and humid environments.